Thanks to our trusty Beta-testers (all hail!) we have finalized the latest Android build of the app and it’s now available via the Android Market!

The new build not only fixes a bunch of bugs you have reported but also adds a bunch of new features. We also decided to boost the version number from 1.2.0 to 1.5.0 as the number of features and fixes increased from the original plan :) 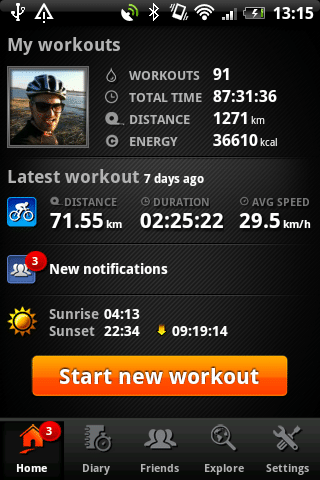 To see if your device is supported please consult GSMArena.com for a full list of HVGA Android devices and devices with a resolution of 540×960 (please note that we do not maintain the list and that in addition to having the right screen resolution your device needs to have Android OS 2.1 or newer to be able to run Sports Tracker).

For each manual or automatic lap (feedback is triggered by tapping the ‘Lap’ button during a workout and by automatic distance based laps):

Not included but already being developed: Heart-rate limit indication.

Other New Features and Fixes

The following new features and fixes are also included in ver 1.5.0 of the Android app.

Thanks to all users who reported bugs and requested feature improvements such as the GPS signal indicator. Keep the info coming – head to our Support-pages to file your report and join the discussion in our development forums to help us further develop the apps.

In the next few weeks we expect to launch ver 1.5.0 with Voice Feedback for iPhone and also a new version of the Symbian app with support for Nokia E6 and other new Symbian devices and the upcoming Symbian update for devices like Nokia N8.