Many of you probably don’t know me, expect those who have contacted us. I’m the one who solves mysterious problems, ok, most of the problems are quite simple and solved with one reply, but at least I like to pretend that I’m the smart guru.

A few days ago I was in the phone with one of our users, 43 year old Mika. After a short dialogue (and trust me when I said that the phone call was short, two native male Finns in the phone – normally there is more repartees in early silent films than in our phone calls) Mika wanted me to pass word to our developers.

Well.. we get this a lot so I asked what kind of message I should pass to them and Mika replied: “Let them know that since I started using Sports Tracker I have lost 53kg and I just want to thank them.”

Normally I’m the one who has always something to say but now I couldn’t answer without stuttering “h-h-how did you do it?” and so Mika told his story about his astounding project. 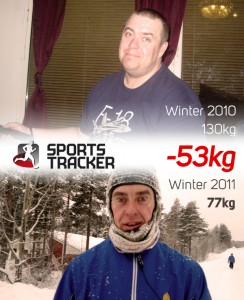 In late December 2010 Mika realized that something needed to change. He had a wife, two small kids and a career in the Finnish Defence Forces. During the years he had gained some weight, serious weight, 130 kilos to be precise. After his long workdays he didn’t have enough energy to play with his offspring or do anything else.

Mika realized that he needs to start exercising on a regular basis in order to change his life. As if by fate Mika got a new mobile, a Nokia N8, around the same time. He noticed the Sports Tracker app in the Ovi Store and downloaded it.

First training sessions were short walking sessions with an easy pace. Suddenly walking was Mika’s daily routine and after a few weeks he started running. Few months later he started cycling, then mountain biking and after that he added gym workouts to the list. During his first 48 weeks Mika lost a kilo per week. Mika also started to share his workouts with relatives and friends to get support from them.

Due to his high-speed weight loss, co-workers and friends who didn’t know Mika’s new way of life started to ask lot of questions:  “How did you do it?”, “Are you ill or something?”, “Did you get lipo on your vacation?”. After few months these questions started to have a really annoying tone, but Mika had an easy task in proving that this transformation had happened without quick fixes or scalpels.

Nowadays if you ask Mika how he did it, he has a simple answer:
“Find my profile on Sports-Tracker.com and follow my workouts. If you think that this change came without breaking a sweat think again and check my burned calories :)”

Did you lose weight or improve your results with Sports Tracker? How did you do it? Share your Sports Tracker story with us in the comments below!